If you are building a home, chances are you’ve been hearing about a “bricklayer shortage” in Perth. This brickie shortage is why there are many slabs that are sitting vacant across the city.

So what are the facts about this shortage and how does it affect you if you’re building? We’ve answered some of the most common questions about Perth’s brickie shortage.

What has caused the brickie shortage?

The $45,000 Government Grants created a homebuyer frenzy! When the Federal Government announced the $25,000 HomeBuilder Scheme, they anticipated that there would be 27,000 applications across Australia. Turns out ScoMo was wrong by over 94,000.

According to the Treasury, Western Australia recorded 17,752 HomeBuilder applications since the grants were announced in June 2020. That means there are at least 16,391 homes that will be needing bricklayers (plus there are nearly 5,000 applications just for the State Building Bonus Package). And while the demand for brickies has hugely increased, the supply hasn’t.

You can click on the image to see how many HomeBuilder Applications for each state have been submitted. 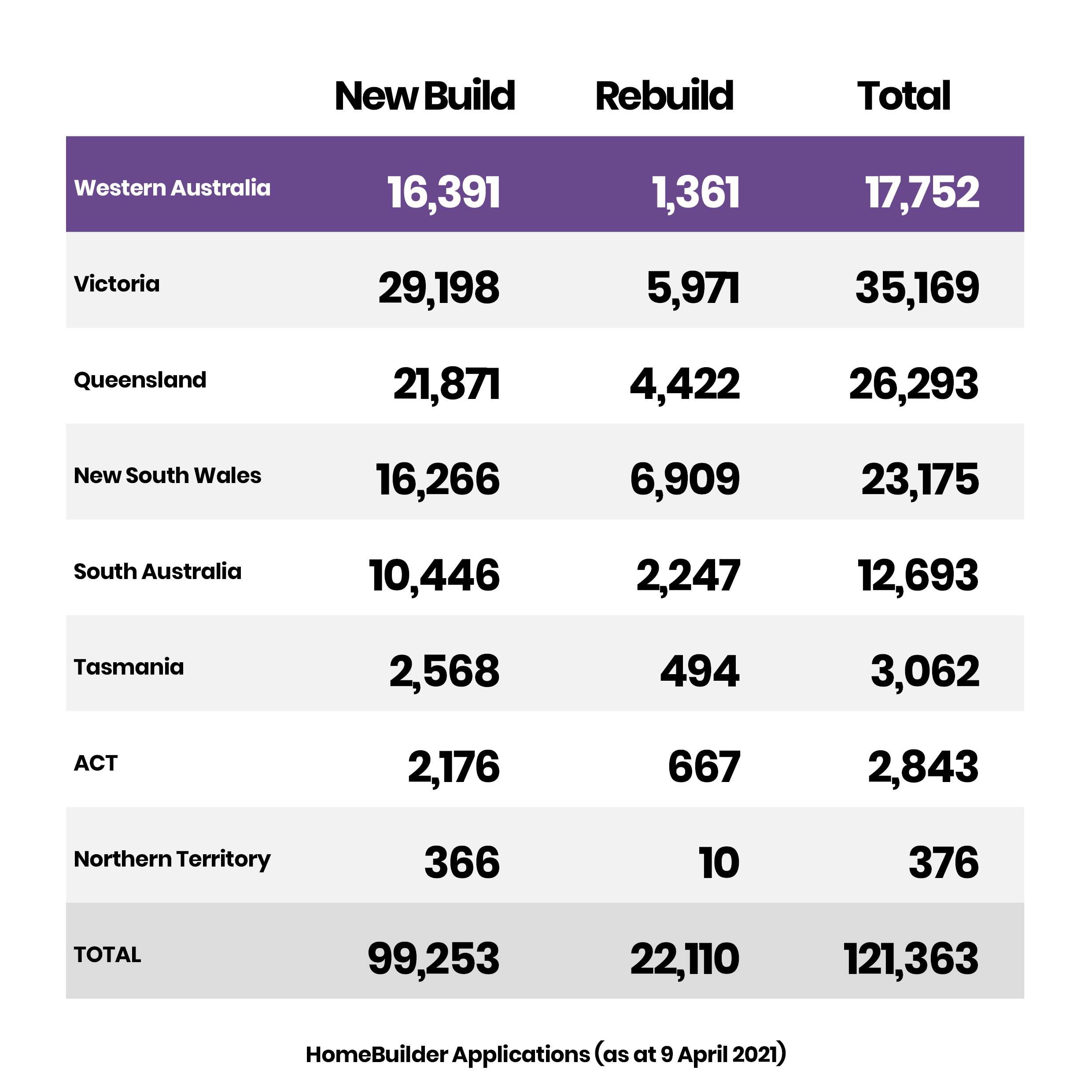 Are other capital cities struggling for brickies?

Not as much as what Perth is for two reasons.

Firstly, the majority of Perth homes are built using double brick. This means there are two layers of bricks on the outside with bricks used for the internal walls. In comparison, most capital cities use brick veneer homes so there is only one layer of bricks on the outside and none used for the internal walls. This means that a brickie team takes a couple of weeks to finish a home here in Perth instead of a couple of days.

Secondly, Perth has been at the bottom of the property cycle. With less homes under construction, many bricklayers have left the industry because of a lack of work. Now that the market has turned, not all of these brickies have returned to the industry.

Another issue that affects all states is that bricklaying isn’t a popular trade. Young people are turning away from working in the scorching sun and instead opting for the high paying mine jobs. As a result, the supply of bricklayers isn’t close to meeting the demand for them.

What have we done for previous skill shortages in building booms?

Normally when one Australian state experiences a building boom, another goes into a slump. As a result, it’s common for tradespeople from one state to migrate to another to pick up more work. But with every state experiencing growth, and COVID-19 restricting interstate migration, state’s can only use local workers.

Is it bad for my slab to sit vacant?

Actually, it’s good for your slab to sit – or “cure” as we call it. Your slab actually contracts after it is poured, which is why you might see those little cracks on them. Sitting vacant gives your slab plenty of time to settle so your walls are placed on a solid foundation that won’t move.

Is there a shortage of other trades?

Yes, but because bricklayers spend more time on site and need to be finished before other trades can start, their shortage is most impactful. Concreters are also in high demand as they pour your slab which is your first major milestone.

Note: Your slab does not have to be laid within 18 months of signing your contract to get the HomeBuilder Grant. Significant earthworks are sufficient proof of construction commencing.

How long will it take for a brickie team to come to my site?

Unfortunately we can’t give you a generic timeframe because the times change each week. If you’re building with Move Homes, we recommend reaching out to your sales consultant who will give you the most up-to-date information about your home.

Check our what designs
suit your block of land

Find out how we are
building homes quicker

Here at Move Homes, we are offering our clients Prime Brick Steel homes that will reduce the amount of bricks (and the wait). Fill out the form below to find out more about this construction method and we’ll reach out.